According to one study, there is an upward trend of “sex recession” that’s affecting many couples in the past years. Some of the factors that experts like social scientists, psychologists, and economists are looking into are the advent of technology and the widely accepted awareness of sexual abuse. Though these things play their part in a couple’s relationship, there are still issues that go beyond what’s under the sheets, which are unique to each relationship.

Couples can lose interest in sex for the following reasons:

A lack of quality time can rob couples of their precious sex sessions. This can happen due to hectic work schedules, childbirth, or changes in priorities.

Sometimes desire can exceed intimacy. A partner may focus more on the fulfillment of their own desires that they lose hold of intimacy. Without intimacy, a relationship may collapse.

Both partners have different needs. If either of them feels that their needs are unmet, sex can die a natural death.

How a person views their body can greatly affect their sexual satisfaction says one study. It’s because a person can hide an aspect of who they are whenever they don’t feel good about themselves.

Though they show or go through different symptoms, both men and women find difficulty during life transitions, especially the menopausal stage. The body goes through a lot of hormonal changes, making the individual’s sex drive to nose-dive.

Criticism can be a great tool to improve a relationship. But when it’s not properly used, it can work against the person and the relationship, which would hurt sex life naturally. 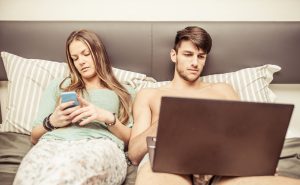 One’s compulsiveness to technology use can also kill the desire for sex. You may be using technology to connect with others but you’ll also be killing the relationship at hand when you don’t know when and how to use your technology without hurting your relationship.

Sex drive can be most affected when you have psychological or physical issues. Failing to give the right attention to this matter can surely harm your sex life.

The above issues are only a handful of the most common reasons why someone’s not interested in going under the sheets. In reality, a lot of issues go inside the bedroom but couples fail to talk about them with each other. To ease the heavy burden within themselves, they go to Reddit to find an answer or simply have a listening ear. These Reddit users may not show their real identities, but their problems are real.

When people start to become more interested in things other than sex, say a computer game, they may feel sex is just a chore, an obligation they need to do before they’re allowed to move on doing other things. Something might no longer be working in this case.

Once romance starts to fade, the desire for sex is sure to follow.  When you don’t feel like having sex or no longer wants to have sex with your partner, it’s a sign something is off-key.

3. Sex with no intimacy

A wife admitted that her husband no longer makes any effort to be intimate with her. Intimacy means more to women because they’re wired to be emotionally connected to their partners. A lack of touch, kiss, or caress can make the relationship dull. As well as makes sex suck.

While hitting forties can make women more confident in their own sexuality, it can be a time for men to experience low libido. In this case, we see a mismatch in a couple’s sex drive. This is a challenge one Reddit user admitted to be facing at the moment. However, men can naturally prevent testosterone decline by changing their lifestyle and taking some supplements.

In a loving relationship, acceptance could never be an issue. There are times when you select a partner who fails to come up with your standards. Nonetheless, you’ll accept them because there’s something in them that makes your heart skip a beat. But when you’re supposed to change a part of yourself to please the needs of a demanding partner, you’re walking on unsafe ground. And this makes you less interested in sex.

7. More frequent sex is a turnoff 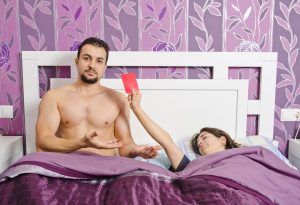 Men want more sex because they’re naturally built for more action. Unfortunately, not all women have the capacity to match their sex drive. He wants more. She wants less. The problem arises. This is truly a problem that requires both partners to talk about and find common ground. Failing to do so can be detrimental to the relationship.

One wife complained of her husband’s declining zest for sex. She recalled how enthusiastic her husband about sex while they were dating. After marriage, he’d changed his preferences and left her at a loss. A person’s sex drive can be affected by many things. Finding what’s causing the issue might help.

Insecurities can affect both men and women, especially when it comes to body image and sexual intercourse. Insecurities often have deep roots. It might not only be a body image issue but a psychological one that drove the person to hate themselves. For this, professional help might be necessary.

A healthy man knows that sex is good for the relationship. But when he’s having health or other issues such as erectile dysfunction, he’s supposed to play fair and tell everything to his partner. Your partner should know when something is off with you. You can’t just promise to have sex when you’re not busy. Keeping them to wait forever can feel like agony.

If you’re having ED problems, like the partner of this Reddit user, admit it to yourself and to your partner. Stop worrying. Your partner will understand and support you. If not, they could have broken up with you the moment you stopped having sex with them.