Hugs aren’t just friendly greetings or a way of being physically connected with someone. It’s more than the bodily bond as it also generates health benefits that are actually backed by science. Hugging triggers the brain to release hormones that create positive manifestations in the body.

What’s more is that a research performed at the Carnegie Mellon University found that healthy adults who got hugs had a lower likelihood of coming down with a cold. This is just one of the many benefits of hugging. Here are 6 more benefits of hugging that are supported by science:

Being embraced before undergoing a stressful scenario, such as giving a speech or going to a job interview can help you soothe your nerves. You’re also able to remain calm and poised during the said event when you’re hugged. This is the reason why people hug someone who needs comforting. Somehow, it’s embedded in our nature that by physically connecting with someone through the act of embrace, we’re helping them get through physical and emotional afflictions. 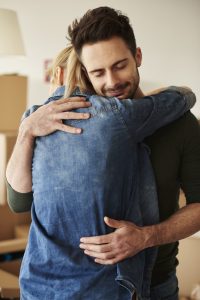 It shouldn’t be surprising how we long to touch and be touched. Humans are emotional creatures and physical connection is one of the ways we convey our emotions. In this case, hugs are associated with people’s capacity to value themselves. This is because the connections of self-worth and tangible sensations from people’s early years are still implanted in the nervous system even during adulthood. So, your parents’ hugs even during your early years continue being instilled in you at a cellular level.

When people hug, the production of the hormone oxytocin significantly increases. This leads to feelings of connection and trust since oxytocin is also the so-called bonding hormone. And with the electrical impulses surging in your body, your heart rate slows down and your blood pressure drops, which make you feel less under pressure and more relaxed. It is amazing how a simple, compassionate touch can lead to an intricate surge of electrical responses in the brain, which manifest physically and emotionally.

Hugging is vital when it comes to the people’s emotional wellness. It even helps the body secrete its very own anti-depressant, the serotonin. This is one of the reasons why hugging a loved one cements the relationship further since it promotes an emotional connection and intimacy, which strengthens a relationship. Since hugging generates positive emotions, it can be very helpful for those people suffering from depression.

Hugs aren’t just plus sides, they’re actually vital for people’s physical and emotional well-being. It even turns out that hugging, somehow, is key to survival. According to experts, babies and animals that are deprived of touch can become so depressed that they may stop eating. This is actually a condition known as ‘failure to thrive’. To make sure that you stay healthy and happy, up your dosage of hugs every day. You don’t need to have a special someone to get yourself some survival-boosting hugs. You can always get it from friends and family members. 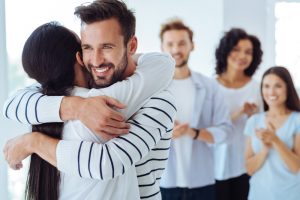 It’s not uncommon to take your partner for granted. It seems this way in any relationship, which is why hugging is crucial when it comes to proving your love and showing your better half that she’s valued. It may just be touching on a physical level, but hugging actually has neuro-biological effects, which create positive emotions.

This is also the reason why hugging is an effectual way to end a conflict between couples. During a fight, hugging can calm both parties down and make them realize how they value each other, which can help them resolve their issue. Moreover,  being close to someone you love during bedtime helps you sleep fast and well, too. It relaxes your body and we all know how we need to be soothed in order to have a good night’s sleep.

Hugs are great. They make us feel good and connected but not just because of the reasons you’re aware of. The simple touching of two bodies creates electrical responses in the brain that generate physiological mechanisms as a result. Hugging isn’t just about people touching. Hormones surge during cuddling, which helps reduce stress and even alleviate symptoms of depression. It helps strengthen relationships as feelings of closeness, intimacy, and trust are established. It is vital for personal growth as hugs can also improve one’s self-esteem and it aids in the resolution of conflicts as people tend to be calm when there are hugs involved.

How to Maximize Work Production Based on Your Sleeping Habits