Drink Like a Caveman: The History of Beer and its Health Benefits Today

When viewing beer from an anthropological standpoint it is easy to understand why it is still such a huge part of our society’s culture today. On various archaeological excavations in sub-Saharan Africa, the discovery of beer production has led anthropologists to confirm that the bubbly beverage was consumed on a daily basis. It served (and still does in some indigenous societies) as a critical component to nutrition, as well as, social and political life dating back nearly 10,000 years at the dawn of the agricultural revolution beginning with the Chinese.

The production of beer throughout the world is a multi-step process that can use wheat, barely, sorghum, millet or maize. Beer is very labor intensive to produce, but it was not considered a beverage in these Neolithic societies, it was (and still is in some societies) considered a food. That’s right, beer was considered so highly nutritious because it contains more nutrients and calories than unleavened bread. In some cultures the bulk of domestic grain stores went to making beer, not bread.

There are still indigenous societies that drink beer as a source of nutrition, in addition to bridging a gap between the living and the dead. Drinking beer keeps history and culture alive globally. Maybe we should view this past time the same way, a tradition that serves as a bridge between our forefathers and us.

So what are some of the latent health benefits of beer today that can give us a good excuse to pop open a brew? We usually associate beer with a man in a wife beater lounging belly up in a recliner watching the big game. Beer has become synonymous with sloppiness. Unless your drinking your local pale, in which case beer has become synonymous with snobby-ness. With trendy craft beer culture on the rise and clinically proven health benefits maybe we should change our perspectives.

In any case, here are some health benefits of having 1-2 glasses a beer per day: 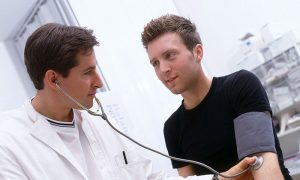 It has been proven by researchers that moderate beer drinkers are up to 23% less likely to develop cognitive impairment in old age. This includes Alzheimer’s, dementia, and short-term memory. There is a small percentage of silicon content in beer that is believe to protect the brain from aluminum in the body, that has been previously linked to mental degradation in the past. So drink up. You may not remember the night before, but you will remember what you had for lunch when you are 80.

Drinking beer regularly can reduce your chances of developing heart disease by 30%. Beer boosts the level of good cholesterol by 10-20%, which is good news for your arteries. Heart Disease is the number one killer in America, so maybe we just aren’t drinking enough beer. Be careful though, those that don’t drink in moderation are more likely to contract heart disease whether it be from other health patterns in their life that mirror their inability to self-regulate or the mass amounts of beer itself.

Beer contains vitamin B6, which prevents the build-up of homocysteine. Homocysteine causes clotting and blockages in the heart’s passageways. Beer consumption reduces the inflammation and plaque build up on the vessel and artery walls.

While it won’t get you much closer to your ultimate beach bod, beer is a great source of soluble fiber. Fiber promotes overall health and helps to clean out the pipes. The fiber keeps your colon clean making you less likely to develop colon cancer.

Beer’s high water content helps to flush toxins from the body helping your kidneys do their job. The kidney’s function to filter your bodily fluids and blood, beer acts as a diuretic, which causes your body to expel and therefore filter more toxins out. Be careful of dehydration though especially when day drinking at events during hot weather. The compounds in hops can also help to release calcium from the bones, which can in turn prevent the formation of stones in the kidneys, which in case you haven’t had the pleasure of experiencing it for yourself is the male equivalent of birth (except you don’t get a whole human being you just get a calcium pebble you can save as a memento). Beer also has high potassium contain and magnesium which can also reduce the risk of stones.

The silicon content in beer has been linked with having good bone health. Those would drink one or two pints of beer a day have been shown to be less frail, having higher bone density. Anymore than two drinks increases the risk of bone fracture though, studies can’t determine whether that is just from falling over more or not. The silicon is readily absorbed into the body when consumed in the form of beer and helps to protect against osteoporosis.

Those who drink 2 beers daily reduce their chances of becoming diabetic in their adulthood by 25%. Beer increases insulin sensitivity, which helps to prevent the onset of diabetes. The soluble fiber (as mentioned earlier) also helps with weight management.

Beer contains a flavonoid compound called Xanthohumol that is found in hops. This essential antioxidant has properties that keep enzymes that cause cancer at bay. It prevents cancer on a chemical level that is specific to prostate cancer in men. It has additionally been linked to breast cancer prevention for women. Beer is additionally a good source of polyphenols that are also found in red wine. Polyphenols are also effective at preventing cancer.

3 Reasons Why Your Smart Phone is Slowly Killing You