Hangover Cures That Will Save You

Table of Contents show
1 Drink as much water as physically possible before you allow your head to hit that pillow.
2 Have a light beer first thing when you wake up.
3 Stop the inflammation.
4 Pedialyte is your friend.
5 Get away from greasy food.
6 Eat something plain first thing in the morning.
7 Menthol and mint actually do help.
8 Grab a ginger beer.
9 Shots of pickle juice, yay!

Everyone has at least one hangover…a year. Maybe even a month. And I wouldn’t be crazy to say some have them once a week. We all know that when a hangover attacks, we need to find the quickest cure possible to get us through the dreaded day.

Believe it or not, there are many ways to cure that nasty hangover. Each person is different though, what works for one may not work for the other. In saying, for example, I mean that one person may like pickle juice, may be able to down it, and may get rid of their hangover symptoms instantly. However, others may not be too keen on chugging, or even sipping, the hardly delicious pickle juice.

But don’t worry. I’m here to help. I’m here to give you so many choices at curing that hangover (other than patiently waiting for it to pass, because let’s be honest, patient isn’t a virtue when a hangover is present) that you’ll have to like at least one of them. Let’s get started.

Drink as much water as physically possible before you allow your head to hit that pillow. 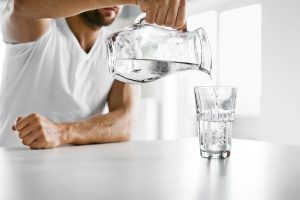 Trust me, you’ll need A LOT of water. Grab a couple of bottles. Get that H2O in your system. Start extra early. Yes, I mean what I say; Start extra early. If you drink water throughout the night while you’re consuming alcohol, you’re more likely to avoid that unwanted hangover effect. Better to be ahead of the game than behind in it. Add in some Advil while you’re at it, it’ll increase the likelihood of waking up hangover-free.

Have a light beer first thing when you wake up.

I know, this doesn’t sound like the most pleasant thing. And that’s because it’s not. But you have to fight through it. The headaches and overall hangover symptoms will go away with just one simple beer. That nauseating feeling will go away, too.

You know that weird, kind of ugly face you wake up with the night after heavy drinking? You know, that one where your face looks a little extra puffy? Well, stop the inflammation before it kicks in. Put an ice pack, or ice cubes, on different areas of your face to lessen the swelling. For extra support in the inflammation field, take a Benadryl before bed. Try not to load up on Benadryl, though, because then you’ll have the drowsy effects that you’ve been trying to avoid. Ibuprofen helps get the anti-inflammatory process kicking, too.

Pedialyte is your friend.

You’ve heard this before, I’m sure. It’s the ultimate helper: Pedialyte.

Many children drink this electrolyte filled drink when they’re sick, or when they’ve been throwing up a little too much lately. But what many people don’t know and understand is that this magical drink can help adults, too. Specifically, Pedialyte’s website even states that the liquid is apt to help with hangovers.

Why would it be such a big helper in curing hangovers? Because, while drinking alcohol, your body is depleted of it’s already absorbed vitamins and minerals. Those vitamins and minerals need to be replenished, and what better way than consuming an electrolyte, vitamin and mineral filled drink like Pedialyte? Plus, the drink gets into your system faster than replenishing it the next day with food.

If you want to make the Pedialyte process fun, make some popsicles with the drink and have a few before bed. Or, just stop by your local 24-hour drug store and pick up a bottle, put some ice cubes in it, and down the fruit flavored drink.

Get away from greasy food.

Even though that’s probably the first type of food you want to throw in your mouth, don’t do it. I know, it’s difficult. Trust me, it’s my favorite when I’m drunk, too. But greasy food doesn’t work this way. It only helps cure what can be a called a mini hangover; If you’re fully gone, and have a huge hangover, that greasy food is not going to get the job done. In reality, greasy food will get that nausea feeling coming right back to you, if you’re extremely hungover.

Eat something plain first thing in the morning. 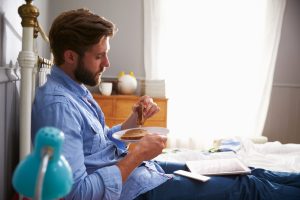 When you’re hungover, your stomach can’t handle everything you want to throw at it. You need to go simple and plain. Eat some toast, and without butter! If you really want substance, add some peanut butter; It’s dry and adds protein to your body, which will in turn give you some extra energy to fight off that nasty hangover.

But make sure you only do this if you’re not completely, utterly, and without a doubt, more hungover than you’ve been in a while.  When you’re that far gone, eating anything will trigger a puke response. Make sure you’re at least a little bit over the nausea feeling, and take a small bite at a time to make sure you’re okay with eating the toast.

Menthol and mint actually do help.

This is another odd thing to think; Menthol and mint actually do help. Why? Because it cures the nausea part of the hangover.

Right when you wake up, and throughout the day (until the hangover is gone), use some peppermint oil or Vick’s vapor rub. Put some under your nose to distract yourself from the nausea feeling, this way you’ll feel refreshed instead of sick.

Ginger beer actually kills two birds with one stone; The ginger helps with headaches and nauseating feelings, and the beer helps with what was previously mentioned: It will help rid you of those gross symptoms.

It’s pretty gross. But think about it for a second, every shot we take is usually gross, isn’t it? Unless you like every single alcohol, and if you do, there may be a problem. Personally, I can do without Jim Bean, but I’ll take the shot if my friends are having it, or if it’s free (come on, if it’s free, it’s for me).

Take the shot of pickle juice. Get it over with. Olive juice does the trick, too. It’ll replace all those lost nutrients, and have you feeling a little more energized than before. Drink some water after the shot, it won’t be so bad.