How to Handle a Mean Girl

You see a girl you think is pretty cute from across the room. You decide to go over and talk to her only to be met with insane sarcasm that isn’t even funny, it’s just down right mean. Your first instinct is to fight back and put her in her place. You wish you could but your dignity has already been taken away, you just saunter off in an angry haze thinking, “Who does she think she is!?”. Here is what to do when you’re faced with a “mean girl”.

If you go up to a girl and start talking and she instantly rolls her eyes. Call her out on that shit! Say “Hey, don’t roll your eyes at me. Who do you think you are?”. This automatically puts you in control of the interaction. Don’t do this in an angry way, keep it light and flirty. She’s probably never had someone call her out on her behavior and chances are she was just testing you and really isn’t a mean girl at heart.

She might just be playing a game with you and that’s perfectly fine. Some girls will tease you just for fun, just to get a rise out of you. You just need to realize when she’s joking and sometimes it’s not that easy to tell. If her face looks relatively relaxed she’s probably joking, if her brow is furrowed and she seems a little frantic, then she’s serious and you should just leave her alone. It’s always best to come at the interaction in a grounded state so you are ready for anything that is thrown at you, which takes me to the next tip…

If you’re in a grounded, happy, present state to start off with, you will probably see her “mean attitude” as funny and not even get offended. It’s all about how you look at it. Don’t fight back, instead make a statement about what you are observing. If she says “Don’t bother, I’m not interested”. Just shrug it off and walk away or say “You’re in a bad mood, it’s cool”. By not giving her too much attention, you are getting the upper hand and it will make her realize how silly she is being. 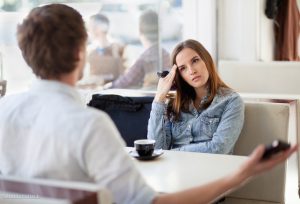 Young Couple Arguing In A Cafe

If you can sense she’s just testing you or just playing around, the best way to pass her test is to agree with the mean things she’s saying. If she says
something like: “Did you getting that shirt from a children’s clothing store?” the best way to respond is “Ya, my mom buys all my clothes for me at Osh Kosh”. This will stop her silly little game in it’s tracks. By agreeing with what she is saying you are instantly taking the power away from her words. She wants to start a “fight”. She’s testing you to see how strong your mind is.

7 Strange Superfoods to Supercharge your Body