The Deadly Art of Krav Maga

Table of Contents show
1 Some main concepts of Krav Maga include:
2 Accessibility
3 It’s Reality Based
4 The Ripple Effect
5 You’ll Feel the Burn
6 5 Tips for Your Krav Maga Workout

Krav Maga, a Hebrew martial arts-based self-defense system that’s literal translation is ‘contact combat’. The system combines different elements from wrestling, boxing, judo, aikido, and Muay Thai. Krav Maga was developed for the Israel Defense Forces (IDF) back in 1948 by a member of the Israeli army named Imi Lichtenfeld. Lichtenfeld quickly became the head instructor of Krav Maga for the IDF and continued to expand defensive and offensive methods according to the real-life interactions soldiers were having on the battlefront.

Krav Maga primarily aims to neutralize violent encounters through simulating realistic encounters as the core principle of training. If the situation cannot be neutralized defensive and offensive maneuvers are aggressive and effective to neutralize, deescalate, and protect, by finishing the fight as quickly as possible. Offensive maneuvers in Krav Maga promote attacks that target the opponents most vulnerable parts of the their anatomy, which include techniques that can permanently injure or kill.

Some main concepts of Krav Maga include:

Some examples of weapons a Krav Maga trained fighter might use if attacked would be a pole, knife, gun, or rifle. Anything that is available within the vicinity could be useful. Situational awareness is paramount to the understanding the art of Krav Maga. The environment should be used optimally to the Krav Maga fighter’s advantage to help them end the violent situation as quickly as possible.

Now Krav Maga has come to the US and is commonly combined with physical fitness trainings. It not only teaches self-defense but is an ass kicking work out that offer conditioning like never before.

Here are some reasons you should integrate the deadly art of Krav Maga into your workout routine:

There is no excuse because everyone can learn it! That is the joy of Krav Maga you can be above average BMI and have no trouble learning how to defend using the Israeli fighting techniques. The system is designed for everybody not just those who are physically fit. It is not an elitist system meant only for the already toned and ripped. If anything Krav Maga teaches how to equalize, and therefore neautralize, in any situation. Diversity in the classroom helps to simulate real life situations even better. Not everyone in the world has the physique of a fitness enthusiast. Krav Maga can teach a petite woman to take down a 300-pound man.

So, there is no excuse for anyone to not take a Krav Maga class. 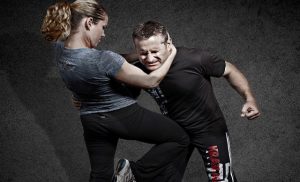 What sets apart Krav Maga from other martial arts like judo, jujitsu or boxing, is how realistic and useful it is to real life. The confrontations taught in class are meant to act as a mirror for the real world. Some situations that are covered during class are: spontaneous muggings, sexual assault, and surprise attacks. Just imagine what your next bar fight will look like once you’ve been trained in Krav Maga. This uncontrolled scenarios prepare you for real life. You are able to practice so that you can feel confident in your abilities off the mat.

It is a non-competitive martial art that emphasizes inflicting maximum damage, which is what makes it so effective in reality. Stress is a big factor in real life situations that self-defense classes often overlook. In Krava Maga classes stress drills are a common part of training that can entail a circle of classmates pushing into someone with punching pads during a drill or even just screaming. Disorienting someone by spinning them around several times is another technique used during practice to simulate real life stress factors.

In real life self-defense is needed during an unideal moment. Krav Maga tries to prepare you best for that moment, not to just look fancy or win a fight based on a point system.

The intense training sessions, discipline and hard work carry over into all other aspects of your life. Developing the skill to perform well under stress is something that we encounter through out our lives. When things get tough at work will you rise to the occasion by any and all means like Krav Maga teaches? It also encourages trainees to have a holistic mentality when approaching any situation. For example like when facing an opponent on the mat, in a real life situation you can look at the problem in front of you and then look to all the resources within your immediate environment you can use to neutralize the conflict with a creative approach that is integrative.

The physical confidence can also carry over into other areas of your life from the bedroom to your most basic reflexes. You will have more general awareness of your own body, better agility, balance and overall mobility. Overall you will have the confidence when walking down the street, that you could potentially protect yourself or even save someone else’s life through neutralizing a violent situation.

In Krav Maga your body is the main weapon. If your body is a weapon, then you’ll want to make that weapon to be in the best shape as humanly possible. Classes combine drills, cardio circuits, and strength training at high intensity intervals. So not only are you learning the techniques that will help you kick major butt on the streets, but you’re also building stamina so your body can carry out those techniques most effectively without exhausting yourself too quickly. Technique won’t matter when your opponent out lasts you in a hand-to-hand situation.

Krav Maga introduces moves to your body that it has never done before. This gives the opportunity to work on trouble areas or strengthen muscles you would otherwise not use. You will be sore in places you didn’t even know existed. There are classes that use Krav Maga and kettle bells or focus just on cardio circuits instead of just training and fight techniques, for those who are more fitness-focused.

5 Tips for Your Krav Maga Workout

The Truth About Viagra