When Can Cannabis Help With HIV

Recreational and medicinal use of cannabis is increasing among the HIV patient population because reports show that it can treat many of the symptoms of AIDS. It can relieve nausea, increase appetite, decrease extreme weight loss, reduce pain, and reduce anxiety. While many speculate that cannabis can be harmful and some believe that it even has the potential to cause AIDS treatment to stop working properly, it is still important to understand exactly how it affects HIV patients because there is unlikely to be a decrease in the prevalence of its use.

Other studies show that drug use and abuse may also cause suboptimal adherence. This type of suboptimal adherence is likely a result of all the effects that drugs have on sleep, eating, cognitive, and other lifestyle patterns. One study shows that drugs users were four times more likely to experience suboptimal levels of antiretroviral therapy adherence. That number jumped to seven times more likely when they were using drugs like cocaine and methamphetamine. These studies are especially disheartening since drug abuse is one of the biggest risk factors of HIV. HIV is a blood borne virus, which means dirty needles can cause the transmission of the virus, so users of drugs that require needle injections, such as heroin and methamphetamine, are at an especially high risk of getting the virus. Since drug abuse is also associated with suboptimal adherence, any drug user who continues to use drugs after HIV diagnoses will have trouble with their treatment.

When it comes to cannabis, scientists are less sure about whether it can be good for AIDS patients because the relationship between cannabis use and suboptimal adherence is unclear. Some report that cannabis use is linked to poor adherence risk factors, including higher anxiety about their medications and higher rates of missed medications. Another study shows that marijuana use can cause asymptomatic HIV patients to start experiencing the symptoms of AIDS. More recent studies have concluded that there is no difference between HIV patients who used cannabis and those who do not, which is optimistic given rapid changes in laws regarding the use of marijuana in the United States. It also means that marijuana might be a good way of treating AIDS symptoms since many report that cannabis can be very helpful with a lot of the symptoms. Other medications might be better for managing pain, appetite loss, and anxiety; however, cannabis tends to work faster.

Still, there are negative long term side effects associated with cannabis use and some of these long terms effects can be harmful to the immune system. Immune system damage is the last thing that anyone with AIDS and other immune diseases wants, but studies show that this immune system damage does not increase the likelihood of suboptimal adherence to treatment. In other words, the negative effects of marijuana are still present in AIDS and HIV patients, but they are not likely to be more pronounced simply because they already have AIDS. The cannabis just causes other symptoms that no one wants to experience, even if that patient does not have a chronic illness like AIDS.

Additionally, plenty of healthcare providers and scientists believe that, if administered properly, marijuana use can give anybody a wide variety of health benefits without causing any of the negative side effects. Many AIDS and HIV patients are already using cannabis to treat their symptoms, so it might be a good idea for doctors to prescribe it so that they can better monitor and regulate how and when patients use the cannabis. By doing this, doctors can ensure that patients experience the minimum amount of long term effects that are associated with consistent cannabis use. 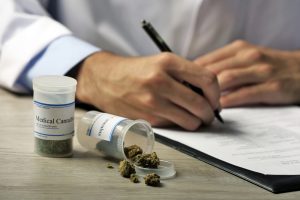 For example, doctors could better control how patients administer the marijuana. Smoking marijuana is often considered the least beneficial way to using it, so doctors can provide patients with better ways of using cannabis to treat symptoms. Smoking it puts patients at a higher risk for lung infections. Since AIDS is already a risk factor for lung infections (even when the AIDS is properly treated), doctors might want to encourage patients to avoid smoking.

Interestingly, one study shows that the benefits of the marijuana in AIDS and cancer patients far outweigh all the problems caused by smoking it. Therefore, even if doctors cannot regulate cannabis use in the patients (either because the patient does not admit to using marijuana or because medicinal marijuana is not legal in the state), the doctor should not be too concerned. Similar risks of lung infections exist in cancer patients, but it has long been shown that cancer patients greatly benefit from smoking marijuana, despite the risks. The case might be the same with HIV patients.

There are still a number of doctors and scientists who are concerned about cannabis use in AIDS and HIV patients. However, because of the growing prevalence of recreational marijuana use both within and without the population of HIV patients, it is important to fully understand the impact that marijuana can have on someone with HIV. Since most patients report that cannabis only improves their symptoms, doctors must recognize that many of their patients are going to turn to cannabis, whether it is medicinal or not. Therefore, it might be best for doctors to try to properly administer cannabis to ensure that patients receive the maximum benefit from it, while avoiding some of the negative side effects.